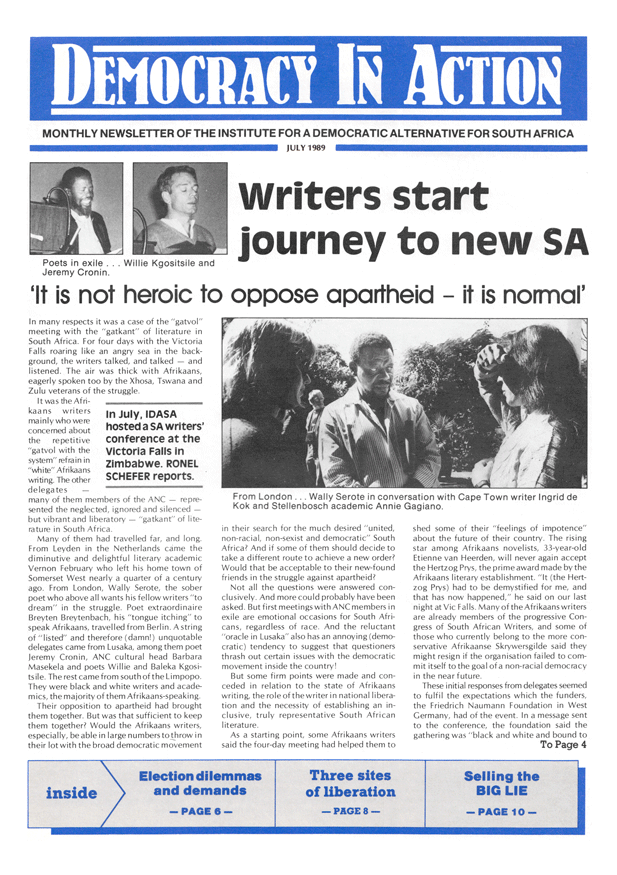 portal. But as one particularly outstanding delegate, Breyten Breytenbach, remarked in Dakar, talking to the Afrikaners in power, the ANC too will realise that to negotiate is to think on fall back positions.
My message to my own constituency in Bonn is that we must do our utmost to promote this nascent dialogue. Financially and even more so politically! We must learn to abstain from prescribing to Africans and Afrikaners what the answers to their problems are. We must particularly abstain from abusing South African (and Namibian) problems for domestic purposes! And we must include in the growing number of our severe condemnations of apartheid, to quote Otto Count Lambsdorff, a liberal, that "it so happens that white security is the key to black liberation".
When in March 1989 the UK and the USSR surprised the diplomatic world with the news on the possibility of a common South African initiative, it was learnt that both London and Moscow will use their influence over Pretoria and the ANC (and the SACP) respectively, to moderate their views on a new South Africa. In times of an apparently decreasing interest of the US in South African affairs, London and Moscow may continue the fruitful US-UK-USSR co-operation of 1987/89 to solve the Namibian conflict. If this is to be done successfully, it will have to be done along the lines discussed, both in the open and behind the scenes, in Dakar and at follow-up meetings in Frankfurt, Harare and, most important, in Bermuda.
It remains to be seen, whether the Bonn government will support a UK/USSR attempt to organise a negotiation-process similar to the Camp David conference on the Middle East in the late 1970s. If it does not, it will be excluded from this policy of mediation, as it was increasingly excluded from the international Namibian initiatives since October 1978.