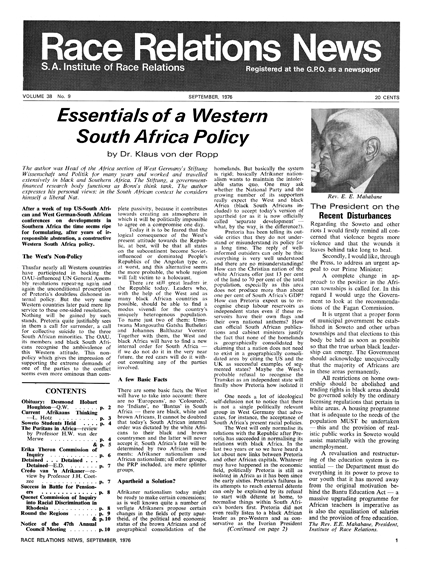 The author was Head of the Africa section of West Germany’s Stiftung Wissenschaft und Politik for many years and worked and travelled extensively in black and Southern Africa. The Stiftung, a government-financed research body functions as Bonn’s think tank. The author expresses his personal views; in the South African context he considers himself a liberal Nat.

After a week of top US-South African and West German-South African conferences on developments in Southern Africa the time seems ripe for formulating, after years of irresponsible abstention, a constructive Western South Africa policy.

Thusfar nearly all Western countries have participated in backing the OAU-influenced UN General Assembly resolutions repeatng again and again the unconditional proscription of Pretoria’s doubtless dishonest internal policy. But the very same Western countries later paid mere lip service to these one-sided resolutions, Nothing will be gained by such stands. Pretoria quite justifiably sees in them a call for surrender, a call for collective suicide to the three South African minorities. The OAU, its members and black South Africans recognise the ambivalence of this Western attitude. This non-policy which gives the impression of supporting the extreme demands of one of the parties to the conflict seems even more ominous than complete passivity, because it contributes towards creating an atmosphere in which it will be politically impossible to agree on a compromise one day.
Today it is to be feared that the logical consequence of the West’s present attitude towards the Republic, at best, will be that all states on the subcontinent become Soviet-influenced or dominated People’s Republics of the Angolan type or, at worst, and this alternative seems the more probable, the Whole region will fall victim to a holocaust.
There are still great leaders in the Republic today. Leaders who, with the help of the West and as many black African countries as possible, should be able to find a modus vivendi for the country’s uniquely heterogenous population. To name just two of them: Umntwana Mangosuthu Gatsha Buthelezi and Johannes Balthazar Vorster. Together with them, the West and black Africa will have to find a new internal order for South Africa - if we do not do it in the very near future, the red czars will do it without consulting any of the parties involved.

There are some basic facts the West will have to take into account: there are no ‘Europeans’, no ‘Coloureds’, no ‘Indians’, no ‘Bantus’ in South Africa - there are black, white and brown Africans. It cannot be doubted that today’s South African internal order was dictated by the white Africans to their black and brown countrymen and the latter will never accept it. South Africa’s fate will be determined by two African movements: Afrikaner nationalism and African nationalism; all other groups, the PRP included, are mere splinter groups.

Afrikaner nationalism today might be ready to make certain concessions; as is well known quite a number of verligte Afrikaners propose certain changes in the fields of petty apartheid, of the political and economic status of the brown Africans and of geographical consolidation of the homelands. But basically the system is rigid; basically Afrikaner nationalism wants to maintain the intolerable status quo. One may ask whether the National Party and the growing number of its supporters really expect the West and black Africa (black South Africans included) to accept today’s version of apartheid (or as it is now officially called ‘separate development’ - what, by the way, is the difference?).
Pretoria has been telling its outside critics that they do not understand or misunderstand its policy for a long time. The reply of well-informed outsiders can only be this: everything is very well understood and there are no misunderstandings! How can the Christian nation of the white Africans offer just 13 per cent of the land to 70 per cent of the total population, especially as this area does not produce more than about one per cent of South Africa’s GDP? How can Pretoria expect us to recognise cheap labour reservoirs as independent states even if these reservoirs have their own flags and their own national anthems? How can official South African publications and cabinet ministers justify the fact that none of the homelands is geographically consolidated by claiming that a nation does not need to exist in a geographically consolidated area by citing the US and the UK as successful examples of segmented states? Maybe the West’s probable refusal to recognise the Transkei as an independent state will finally show Pretoria how isolated it is!

One needs a lot of ideological self-delusion not to notice that there is not a single politically relevant group in West Germany that advocates, for instance, the acceptance of South Africa’s present racial policies. The West will only normalise its relations with the Republic after Pretoria has succeeded in normalising its relations with black Africa. In the last two years or so We have heard a lot about new links between Pretoria and other African capitals. Whatever may have happened in the economic field, politically Pretoria is still as isolated in Africa as it has been since the early sixties. Pretoria’s failures in its attempts to reach external détente can only be explained by its refusal to start with détente at home, to normalise things within South Africa’s borders first. Pretoria did not even really listen to a black African leader as pro-Western and as conservative as the Ivorian President

Felix Houphouet-Boigny who, addressing the OAU at the end of May 1973 in Addis Ababa, asked the members of this organisation to open dialogue with the ‘minorités’ de mépris’, the minorities who disdain (the black majorities). So Houphouet-Boigny’s intention was, among others, to liberalise things inside South Africa.

If on the other hand, we base our new South Africa policy on the ideas of African nationalism only — as is demanded by the OAU today, and in its wake, by the UN — we would contribute to the replacement of old injustices with new injustices. It would be naive to believe that after an ANC/PAC take-over the three African minorities would still be tolerated as South African/Azanian citizens, Whatever their historical position was, they would have to share the white Mozambiquans’ and Angolans’ fate, They would be thrown into the sea. And neither the OAU nor the UN would waste a minute on condemning the expulsion of these African minorities from South Africa/Azania. By demonstrating just as much disregard for the human and civil rights (especially those of minority groups) which they continually acclaim (as do the white governments they are opposing) the black African states lost the West’s support for their demands for a system of ‘one man one vote’ in South Africa.
Tanzania, in a statement on Uganda just before the 13th OAU Summit Conference was opened in Kampala, was one of the very few black African states that accused black Africa of hypocrisy for condemning and combating South African racism while ignoring abuses inits own ranks. The Tanzanian statement even went as far as to say ‘but when massacres, oppressions and torture are used against Africans in the independent states of Africa, there is no protest from anywhere in Africa ... Africa is becoming unique in its refusal to protest about the crimes committed against Africans, provided such actions are done by African leaders and African governments’. But we in the West cannot base our new South Africa policy on a lonely voice!

It should be quite obvious that the new Western South Africa policy will have to find a compromise between the interests of African and Afrikaner nationalism. Quite a number of Western observers in this situation will sympathise with the PRP’s concept of gradual integration, But it is questionable whether there is that common denominator in the economic, social, cultural, and above all, in the political field without which even a federal set-up can never work. Do those genuine white liberals who support the PRP really believe that their black countrymen are ready to adopt a Westminster-type democracy, a capitalistic economic order? Do they not realise that in the days of ‘authenticité noire’, of ‘black consciousness’, black Africans in black Africa as well as in the Republic have consciously divorced themselves from western notions in order to develop their own notions in the political and in the economic fields?
How do the PRP supporters and voters react to Chief Gatsha Buthelezi’s great speech telling his people in the Jabulani Amphitheatre in Soweto on 14 March 1976 ‘Inkatha is not peculiarly Zulu: it is a constitution of the type which has emerged in black Africa to meet the deficiencies of the Westminster type constitution. A democratic system with the stamp of Mother Africa which has consensus as its core’,
In formulating its new South Africa policy, the West will have to take into account that as this common denominator just does not exist, it would be irresponsible to try to establish a multi-racial society in South Africa.

Even for those in the outside world who have a detailed knowledge of the South African scene, all those plans (those of the UP included) about finding a solution in a specific type of federation or, more probable, in a specific type of confederation, have two things in common: they are confused and thus not convincing. Neither African nor Afrikaner nationalism will ever accept one of them as a final solution, What model should we therefore support from outside? Only one answer seems to be possible: as a system of sharing power is not possible because it will not Work, and as no group of South Africa’s population is prepared to commit political suicide there will have to be a fair partition. One or several black states, and one state for the white/brown Africans.
It should be noted that the leading conservative-liberal West German daily, Frankfurter Allgemeine Zeitung, has stated several times in the last nine months or so that the only alternative to civil war in the Republic seems to be a fair partition of its territory. (cf. Klaus Natorp in Frankfurter Allgemeine Zeitung ‘Suedafrika und wir’ 17.10.75, p. 1; ‘Wie weiter in Suedafrika?’ 11.3.76, p. 1 and ‘Schwieriger Schwarz-Weiss-Dialog’ 26.6.76, p. 1.) And the Frankfurter Allgemeine Zeitung’s is by no means a lonely voice, a voice in the wilderness. This might explain why not only Germans reacted so positively to the speech ‘Partitionist’ which Dr. Erich Leistner of the Africa Institute in Pretoria gave at the end of April 1976 in Umtata at a conference organised by the Foreign Affairs Association in Pretoria - and our people were even more touched by the Afrikaans-speaking press’ positive reaction to Dr. Leistner’s speech.
In Europe there is no doubt about the fact that the more the white Africans waste time before accepting a compromise, the more the future border between the black African and the white/brown African world approaches the Port Elizabeth-Bloemfontein-Sishen-Oranjemund-line.
The West will have to finance such an operation through aid schemes of the Marshall-plan type. There is no alternative to overcoming the gigantic economic and other obstacles of such a solution, which is, of course, no more than the lesser evil for both parties to the conflict - but the consequences of the otherwise inevitable great war in and for South Africa will be far more costly.
Finally, to make sure that this solution is not just a first step in the black Africans’ takeover of the Republic but a solution on which the three African minorities can rely, the West must be ready to offer the white/brown Republic of South Africa full membership in a western defence alliance.